Hotel by Cirque Éloize: An Insider Look at Life on Tour

To create the show Hotel in celebration of its 25 years of existence, Cirque Éloize has taken inspiration from its long experience of staying in hotels across the globe. The artists were interviewed at the Cirque’s facilities in Montréal during a creation and exploration workshop, and they gave some insights on their nights on tour and their next show.

China, Brazil, France, Saudi Arabia, New Zealand… Cirque Éloize’s troupe travels thousands of kilometers each year to perform for its audience. Every day, there’s another city, another show, another hotel. The Cirque took inspiration from this nomadic life to create its new show, Hotel, a Place des Arts and TOHU co-production that will be presented at Théâtre Maisonneuve in November 2018.

Through acrobatics, theatre, dance and music, spectators will dive into a cosmopolitan adventure where hotel employees and customers mingle. “When we travel, we meet people of different origins and cultures,” said clown Jérémy Vitupier, who has been working with the troupe for four years. “It’s very enriching, even if we don’t stay with them for long. Our life is about meeting and leaving people. We’re both sad to leave and happy at the thought of meeting new people on our next stop.”

The Cirque’s artists stay in each city from a few hours to over a week. This fast‑paced rhythm doesn’t stop the artists from making the most of every stop. “While the technicians are working on installing the stage and preparing costumes and props, we do a bit of training, or we take some time to visit the city and meet the people who live there,” said Jérémy Vitupier.

To take in the culture, acrobats sometimes even spend the night in a local’s home. “Sometimes my hosts don’t speak French or English,” said Vitupier. “It’s difficult at times, but it leads to fascinating discussions and it keeps things lively. In China and Brazil, for example, we spoke using our hands, but we always managed to understand each other!”

“Our life is about meeting and leaving people. We’re both sad to leave and happy at the thought of meeting new people on our next stop.”

Audience interaction is also different depending on the country. “Every time you go to a different place, it’s a different show,” said Sabrina Halde, who had gone on several tours in Europe with the music band Groenland before joining Cirque Éloize’s troupe. “In Germany, people applaud only on the last note. It was very surprising at first because, here in Quebec, people applaud and sing along the whole time!”

A sense of family

Even though the artists are free to do whatever they want after the show, they rarely go on wild nights in their host city. “We have a party on stage, so we don’t need to go clubbing to let loose,” said acrobat César Mispelon, who was part of the Cirkopolis tour in China. Echoing his comment, Sabrina Halde said, “Normally, we only go for dinner and a drink together after the show, or we go back to the hotel to relax.”

To keep their morale up during long tours, the artists like to play around. “We tell jokes, or we play pranks on each other to maintain a good atmosphere,” laughed Jérémy Vitupier. “In China, we made a kind of Advent calendar to count down the days until the end of the tour. Each day, the technicians would open a box and find a joke, a gift, a piece of chocolate… For Christmas, we also do a Secret Santa gift exchange for the whole month of December. We hide presents backstage and we do treasure hunts.”

Evenings are quiet most of the time. “We play a board game, or we watch a movie,” said César. “We can’t afford to go on wild outings because we need to be in shape for the show. If we’re tired, we can’t focus as well and, since we work in duos, it can be dangerous. If I make a wrong move, my partner could get hurt.”

In the world of circus, travelling not only shapes character, but also creates a united family that shares the good and the bad times. This sense of family will permeate the new show, Hotel, which will be presented at Théâtre Maisonneuve from November 14 to 17 before it sets off for other lands. 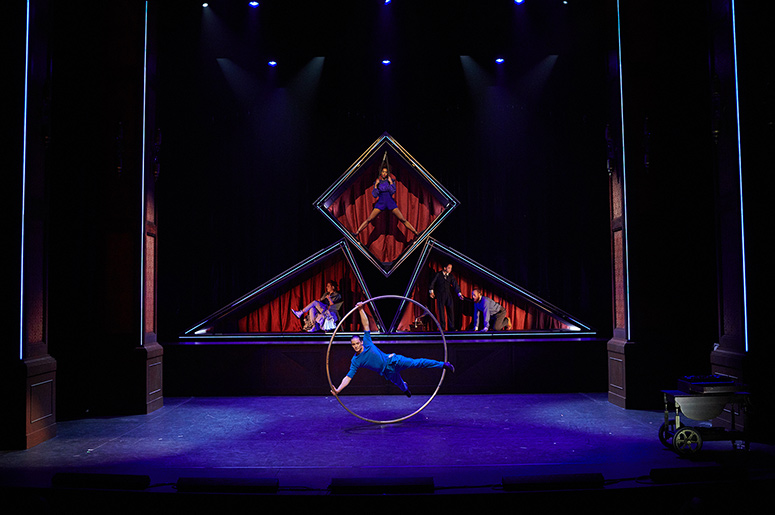