In accordance with government directives, Place des Arts has suspended its activities until April 13th inclusively. The Kent Nagano conducts: Music, Fashion and Movement concert has been cancelled. These measures have been put into effect due to circumstances relating to the COVID-19 coronavirus pandemic which are beyond our control. Ticket holders will be reimbursed.

The idea of combining classical music, movement, dance and clothing has led to an unprecedented meeting between the universes of fashion creator Marie Saint-Pierre and Maestro Kent Nagano.

On the programme: the nobility of Bach’s concertos, the frenetic pace and atmosphere of the needle industry (upon entering the concert hall with Le fil conducteur by Robert Normandeau) that inspired Régis Campo’s work, the grace and virtuosity of Anna Burden in Lamentatio, and finally, the music of Strauss’ Le bourgeois gentilhomme, which reminds us that … we shouldn’t judge an emperor by his clothes! These works are heard alongside the music of the runway, fashion and dance while incorporating gesture, music and theatricality.

Some great feminine figures set the tone for the evening. Apart from Marie Saint-Pierre, who first collaborated with the OSM about a decade ago, choreographer and dancer Louise Lecavalier, and actress Julie Le Breton also take part in the event. Le Breton plays M. Jourdain, the famous Molière character who now makes a landing on the stage of the Maison symphonique after a modernistic interpretation by talented stage director Mani Soleymanlou.

The textures and the fluidity of Marie Saint-Pierre’s clothing are showcased in this concert, magnified by the models with within a choreography that brings movement to the forefront.

On Friday night, this “soirée éclatée” makes its way to the foyers at the Maison symphonique after the concert! 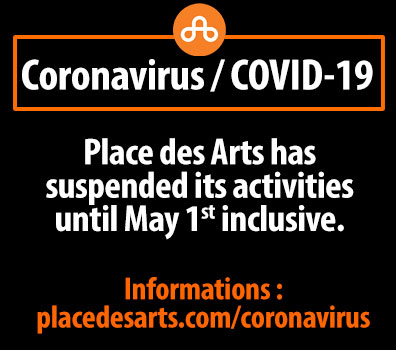