Since its beginnings in 2014, the Scottish folk trio Talisk has energetically sown the music scene with its modernized and inventive traditional melodies, melding fiddle, guitar and concertina, a close cousin of the accordion.

This recognition led Hayley Keenan (fiddle), Graeme Armstrong (guitar) and Mohsen Amini (concertina) to multiply their concerts at major festivals and share their contagious rhythms from Scotland to Australia, with appearances in North America and Denmark. The three musicians combine remarkable fire and virtuosity. Their intense and generous performances are celebrated everywhere.

In fall 2018, the trio published a second album, entitled Beyond, with instrumental pieces paying tribute to travel. They are played out in several nomadic chapters, one of them dedicated to Montréal. Talisk visited Québec for the first time at the end of July, in the context of the Festival Mémoire et Racines, in Joliette.

Talisk’s co-founder, Mohsen Amini, last year became the youngest winner, at age 25, of the Musician of the Year title at the 2018 BBC Radio 2 Folk Awards – and the first concertina player to win such an award. He talks to us about the path followed by his band, the group’s concerts and the “Montreal” piece. 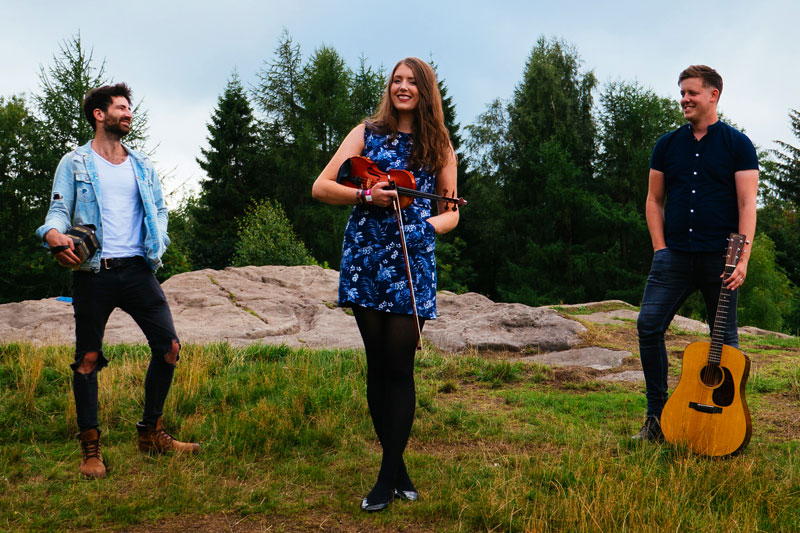 Since your beginnings in 2014, your path has been impressive and marked by a series of successes. What have you found the most striking in this ascent?

We created the group with the goal of playing for pleasure, but I must acknowledge that our awards completely changed the group’s life. We were able to play at huge festivals like the Cambridge Folk Festival, and then throughout the United Kingdom… and all over the planet!

The awards were certainly a pleasant surprise, but what amazes us the most is that we can travel thanks to our music. It’s a tremendous privilege, and we pinch ourselves to make sure we’re not dreaming when we’re lucky enough to play in places like Québec.

Your second album, Beyond, is inspired by your travels. What did you want to convey with this record?

We wanted to bring together all the inspirations and influences we encountered on our tours. The album reflects what we absorbed and created in the cities where we played.

This album contains a piece entitled “Montreal”. Can you tell us about its creation?

I was going to Halifax for a recording session, but I was caught in Montréal due to a big snowstorm that forced cancellation of all flights to the next day. Members of my family had settled in Montréal and I hadn’t seen them for 15 years. They all came to the airport to surprise me, and I had a wonderful evening! That’s the only time in my life I was happy a flight was cancelled!

How has your music been influenced by such frequent touring?

By giving shows, we understood that composition and recording are only part of the equation. Concert performance is another essential dimension of our music. This awareness changed the way we compose. We now add effects and many pedals to our performance, while remaining within the spirit of Talisk.

Your performances are a concentrate of energy. How do you work on this dimension of your music?

We compose parts of pieces that we have fun working on and deconstructing. We record on our phones constantly. When a good melody emerges, we make it the centre of a new composition. We test it on stage to see how the crowds react, and we come back to the studio to adjust it. We repeat the process until the piece seems perfect to us, both in concert and in studio. This allows us to preserve our musical integrity while ensuring that everyone has fun, regardless of the listening context.