RURA at Place des Arts: a chance to fall in love with Scottish music

Recipient of numerous awards for their albums and concerts, the Scottish folk band RURA has an undeniable reputation. Well-known and recognized in Scotland and beyond for its energetic and inspired style, the band is celebrating its 10th anniversary this year. To mark the occasion, its four members will be on tour for the next several months. Not only will they stop in Australia, Spain and Sweden, but also here in Montreal, at Place des Arts.

One of the founders of the band RURA, David Foley, tells us more about the band and the show they will put on with Talisk on April 22 at Place des Arts.

How would you describe your music?

After all these years, it is still the most difficult question! (Laughs.) I would describe our music in two ways. First, it is Scottish contemporary folk music that explores themes like heritage, belonging, and sense of place. Secondly, it is uplifting and tangible music that invites each human being to dive into their emotional universe, as it is. This sensory and experiential aspect is very important to us. We want people to be moved while listening to our music.

RURA celebrates its 10th anniversary this year. What’s the story behind the band?

Three of us were studying music at the same university in Glasgow, the Scottish metropolis. One day, the urge to form a band sprang up. Our main motivations at the time were to go on tour, play music and party! Very quickly, this dream became reality. We were the first ones surprised! Ten years later, our motivations have slightly changed: what matters most to us is to continue to express ourselves through our greatest… and only talent: music. (Laughs.) Our need to play is so strong that, in addition to RURA, each member of the band has an individual musical project. That being said, RURA remains our central project. 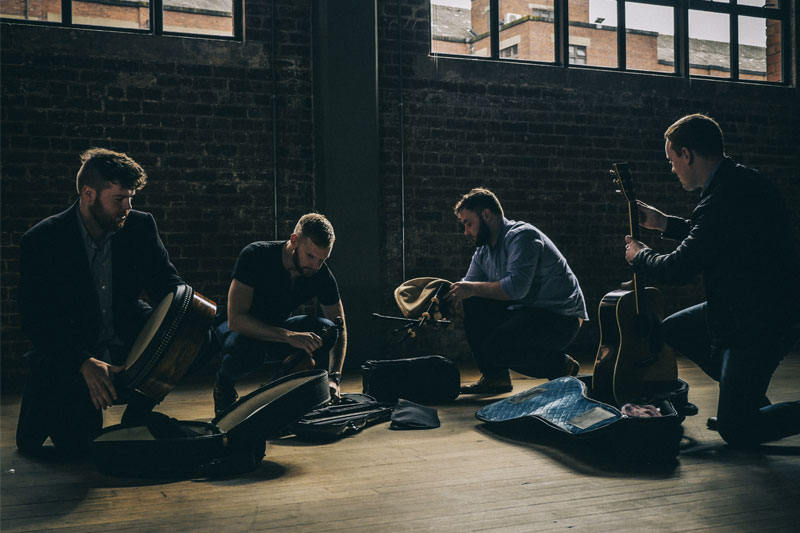 What is your relationship with the province of Quebec? Have you been here before?

That is very funny because, at the moment, our only experience with Quebec comes down to having driven on the Trans-Canada Highway! We were coming from Prince Edward Island and we were going to Toronto, where we were supposed to perform. I say “supposed”, because our show was finally cancelled… but that is another story. So, we can say that our presence at Place des Arts in April will be our first real experience in Quebec. Otherwise, we know, of course, traditional Quebec music bands, such as Le Vent du Nord. A group that we love and that inspires us a lot.

Your show at Place des Arts will be a Scottish double bill with the band Talisk. What is your relationship with this band?

Talisk is an excellent Scottish folk music band with whom RURA shares many musical similarities. Besides this, all members are close friends. We even went to each other's wedding!

What can the audience expect from this show?

It will be an exciting double program during which the two bands will play separately. But overall, you can expect explosive sonorities, contagious energy and original arrangements. You can also expect to see and hear different instruments, some of which are more exotic. While we mix fiddle, Highland pipes, flute, guitar, keyboards and bodhran, a percussion instrument used in Irish music, Talisk mixes fiddle, guitar and concertina, a close cousin of the accordion. Also, during this show, RURA will mark its 10th anniversary by revisiting its entire repertoire. We will therefore play pieces from our three albums, In Praise of Home (2018), Despite the Dark (2015) and Break It Up (2012). Besides, we have just finished recording a live album, which paints a picture of our entire journey.

Why should Quebec’s audience attend your show?

For the simple reason that everyone loves Scottish folk music! The problem is that many people still aren’t familiar with it. Coming to our show will allow you to discover it… and fall in love with it! And what could be nicer than letting a new love express itself?