Behind the most recent cine-concerts presented at Place des Arts are three talented and ambitious young entrepreneurs: Gabriel Felcarek, and Francis and Nicholas Choinière. The trio running GFN Productions has decided to give us an eyeful and an earful!

We interviewed Francis Choinière, President of the production company and a student in orchestral conducting at McGill University’s Schulich Music School, about the trio and a cine-concert to be presented soon in Salle Wilfrid-Pelletier: Lord of the Rings — The Two Towers.

How did GFN Productions start and what made you decide to produce cine-concerts?

Francis Choinière: I worked as a choirmaster for the past few years on other productions of this kind, particularly Harry Potter and Game of Thrones. I asked myself what other film had a rich orchestral and choral soundtrack, and Lord of the Rings came to mind. This is the project that drove us to launch our production company.

You now manage GFN Productions with your twin brother Nicholas and your friend Gabriel Felcarek, whom you knew in elementary school. How do you complete each other?

For the past few years, I have directed concerts for the Orchestre Philharmonique et Chœur des Mélomanes; direction is my specialty. Nicholas is studying at the École de technologie supérieure in electrical engineering and works with technology, so he takes charge of this aspect of our production and marketing. Gabriel has always been good in finance, so he took charge of this aspect as well!

You presented the first part of Lord of the Rings last year at Place des Arts to sold-out audiences and followed up with other productions. How is this going?

Things are happening fast! During our first year, we produced three cine-concerts: the first part of Lord of the Rings, the fourth film of the Star Wars saga, and Fantasia. These are completely different works that reach different audiences. We were enthusiastic about these projects. We are already looking ahead to the third part of Lord of the Rings. The hall reservations and rehearsals must be planned long in advance.

You concentrate your activities mainly on cine-concerts. What motivated you to choose this particular format?

We want to renew classical music with the orchestral and choral works of our times. Most people who come to see these cine-concert productions have never attended a symphony orchestra concert. We are developing the interest of a new clientele in orchestral music.

While Titanic brings together 130 musicians and choristers on stage, Lord of the Rings poses an additional challenge with its ensemble of 250 people. Is this your most ambitious production?

Definitely! We need at least 85 orchestra musicians, a choir of 50 to 60 children and a hundred adult choristers to respect Howard Shore’s vision when he created the cine-concert. He wanted the presence on stage to be in phase with what is seen in the film. For me as a choirmaster, the difference is mainly in the length and the fact that the pieces are in several languages, which is more complex.

You presented your first production at Place des Arts in January 2019. What does this institution mean for you?

I have a long relationship with Place des Arts. I remember dress rehearsals of the Opéra de Montréal, which we attended in school groups.

For the cine-concerts, the Place des Arts team has shown confidence in us since our first production, and we are already doing long-term planning for our next shows.

Salle Wilfrid-Pelletier is the ideal Montréal venue for our productions. It is one of the only places with enough room on stage to accommodate the 250 musicians!

After this winter’s cine-concerts, what awaits GFN Productions?

We want to complete the trilogies we started. We’re also working on developing other markets, such as Toronto and Vancouver. But this will be a long process. We also have several productions in the works, but it’s too soon to talk about them…

Lord of the Rings: The Two Towers in Concert will be presented on February 28 and 29 and March 1 in Salle Wilfrid-Pelletier of Place des Arts. 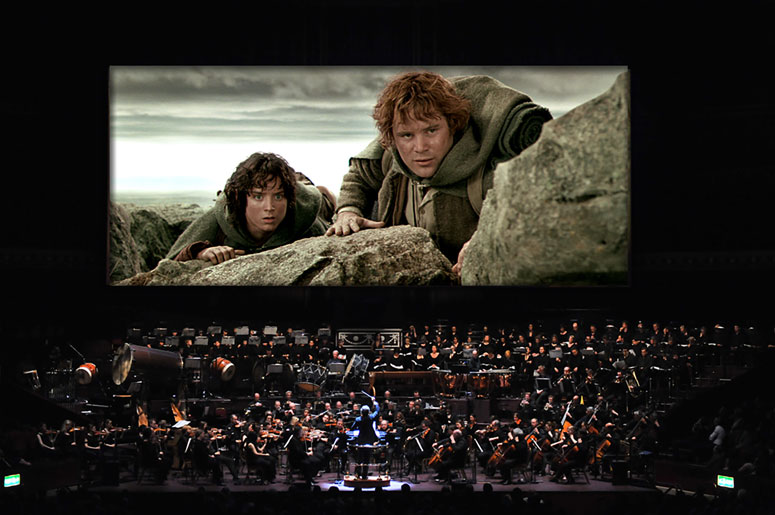