Songs of struggle, songs of hope, rallying songs: all of these make up the show We Shall Overcome, which pays tribute to civil rights activists and militants by exploring the music that fuelled their struggle. From gospel to folk, including jazz and religious songs, our playlist recapitulates this combative repertoire. Music that makes listeners want to raise their fists in solidarity.

Designed and directed by musical prodigy Damien Sneed, this show, also built around Martin Luther King’s speeches, brings together a group of agile musicians who move from a melody by Duke Ellington to a song by Nina Simone, a Simon & Garfunkel hit or a Tina Turner classic.

Sneed and his collaborators indulge in improvisational moments and enjoy changing the pieces on the program every evening, showcasing the excellence of African-American music and its emancipating political power. If racism has lost ground over the past two centuries in the United States, it is partly thanks to this powerful and rallying music. It is impossible to know in advance the exact repertoire that Sneed and his band will perform in Montréal on January 16, 2020. But to prepare you for the show, our playlist offers some of the songs it is very likely to include.

We Shall Overcome, by Joan Baez

The song gives its title to the show, because it marvelously embodies the tenacity and resilience of African-Americans in the face of repeated affronts. “We shall overcome some day” and “We shall live in peace,” says this protest song, derived from an old gospel hymn by Charles Albert Tindley, which appeared for the first time in 1900. Joan Baez’s version in the 1960s profoundly influenced the civil rights movement.

“God bless the child !” In the context of the civil rights movement, this Billie Holiday song can be viewed as a celebration of the birth of Martin Luther King himself, which led in its wake to an entire generation of African Americans engaged in the struggle for equality. Damien Sneed performs it with great sensitivity.

Almighty God Has Those Angels, by Duke Ellington and Alice Babs

Religious songs fascinated Duke Ellington in the last part of his life, and he brilliantly blurred the boundaries between the profane and the sacred, while bringing the codes of jazz and soul closer together. This song is a perfect illustration of this fusion.

I Wish I Knew How It Would Feel to Be Free, by Nina Simone

In 1967, Nina Simone recorded this song with its touching lyrics, a hymn to a freedom never obtained at that time by her peers on American soil. “I wish I could break all the chains holding me,” the dynamic song declares. An inspiring quest for the absolute.

You’ve Got To Move, by Two Gospel Keys

In 1948, the group recorded this up-tempo gospel version, very well known today, of the traditional song You Gotta Move. A powerful call to action, this classic calls on people to be the agents of their own destiny.

Call Him By His Name, version by Damien Sneed

As a child, Damien Sneed sang this old gospel song at the Good Shepherd Baptist Church, in his native city of Augusta, Georgia. Religion and the redeeming figure of Jesus, evoked repeatedly in this song, were vectors of strength and courage in the non-violent movement led by Martin Luther King.

We Are On Our Way, by Wynton Marsalis

This more recent jazz piece, which prominently features brass, is taken from the album The Abyssinian Mass, by Wynton Marsalis, with whom Damien Sneed designed an outstanding concert integrating the 60 singers of Chorale Le Chateau. A “processional” song, which reaffirms the right of peoples to march straight ahead and the necessity for everyone to make their own path.

It's Freedom, by Duke Ellington

Bridge over Troubled Water, by Simon and Garfunkel

What’s Going On, by Marvin Gaye

I Don’t Feel No Ways Tired, by Marian Anderson

I’ll Make It Alright, by The Valentinos

Walk With Me Lord, by Lynda Randle 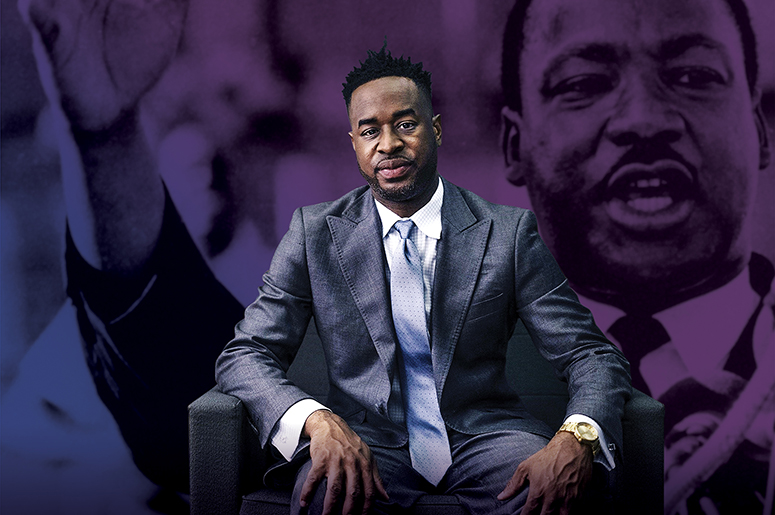 We Shall Overcome - A Celebration of Dr. Martin Luther King Jr.